THE BENEFITS OF PLAY:

Play allows children to use their creativity while developing essential life skills. It is important for healthy brain development. Through play, the children at a very early age engage and interact in the world around them. At Junior Builder, we pride ourselves in creating a stimulating but fun environment where children can develop the skills below. What a fun way to ensure that your child develops his/her full potential by using the Duplo Bricks as a tool of teaching.

LEARNING HAS NEVER BEEN MORE FUN

Perception is developed through information that is gathered from the senses (hear, touch, smell, taste and see).Perceptual skills allow sensory information to be successfully obtained and understood with the appropriate reaction. Put simply, it enables the children to make sense of the world and environment around them and act accordingly.

Fine Motor Skills: Focuses on developing the smaller muscles of the fingers and wrists, which enable better control of the smaller movements such as picking up small objects.

Gross Motor Skills: Develops the larger muscles in the arms, legs, torso and feet, enhancing the bigger movements such as jumping, sitting and running.

Social – Emotional development includes a child’s expression, how a child manages his/her emotions and the ability to build positive relationships with others.

Language focuses on the development of a child’s vocabulary. Language development is important to a child in order to adequately exchange information with others in a meaningful way. A delay in language skills can cause frustration for a child as well as miscommunication about what he/she may be trying to convey.

Creativity encourages children to try out new things and ideas, which is a crucial factor in their intellectual, physical and emotional growth. It is a way of thinking and expressing themselves. Discovering and inventing new things motivates them to be imaginative and inventive.

Please see below an example of how the Junior Builder programme is constructed to ensure the development of the essential skills: 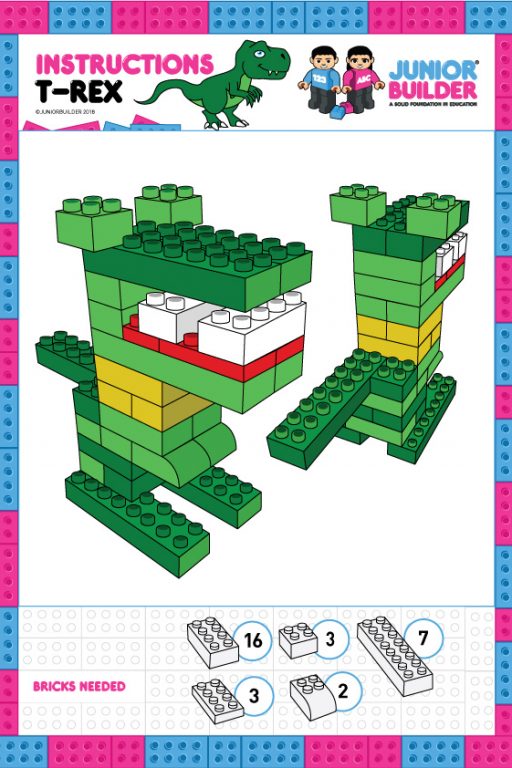 Using a tablet, the instructor shows the children pictures of a T – Rex and introduces them to some of the sounds a T – Rex would have made, how the T- Rex walked, ran and hunted for its food (digital learning).

While showing the children the images and videos, fun facts about the T – Rex are explained.

Once the instructor has explained a few fun facts to the children, each child gets a basket with the bricks needed to build a T – Rex. The lesson plans are displayed for the children to see and are instructed to build their very own T – Rex.

The children are using all major senses to learn, which in turn helps the children internalise the facts.

During this lesson, children have the freedom to explore using their imagination.
The instructor will tell them a story or present a puppet show associated with the theme.

The children will then be instructed to build something they remember from the story using the Duplo bricks and other odds and ends, example feathers, lace, material, straws etc. Once the children are done building, they will each get a chance to explain to class what they built.

In the time of the dinosaurs there were many volcanic eruptions. With this lesson the instructor along with the help of the children are asked to perform an erupting volcano using the below ingredients. While they are building the volcano, the instructor will introduce a few fun facts about the volcanos during that era.

Give each child a few bricks of the volcano. When it’s their turn they can put all their bricks onto the volcano.

Instructor to place bottle with ingredients in the middle, let them watch what you put in the bottle.

Put bottle in middle of the volcano you are building and let them finish building volcano around it.

All children to stand/ sit around the volcano, do a count down from 10 and instructor to drop baking soda ball in bottle and watch the volcano erupt.

The experimental build is all about experiments and with this lesson we decided to even get the parents involved. With this lesson plan, we explored the amazing Dinosaur eggs.
Each child was given a basket of bricks and had to follow the instructor whilst she built her egg. As they were building the instructor was teaching the children some fun facts once again about the dinosaur eggs. Once the children were done building, the instructor introduced them to a fun egg experiment. The experiment was done prior to the lesson because of the time restraint but the result was brought to the lesson for the children to see and hold. What made things even more fun, is we posted the egg experiment on our groups and asked the parents to perform the full experiment at home with their children.

What you will need:

Experimenting with Dino eggs. You can tell the children that you have a surprise egg for them to touch and feel but they need to build their own egg first. You can put children in pairs with their bricks and baskets. Children need to copy your Egg and build their own, try only help where needed.
After they have built their eggs, place it on the plates.
You can now show and explain to the children what you did at home and why Vinegar does this
Let them touch, feel and slightly hop the egg (conclusion below).

Explain to children what they have to go do at home.
Take an egg, place in vinegar for 24 hours and remove shell thereafter to find a nice rubbery egg. Egg must be completely covered with vinegar.
The eggshell is dissolved because vinegar is an acid and eggshells contain calcium carbonate, which is a base. When these two chemicals are combined, a chemical reaction occurs. Carbon dioxide is formed, which is why you see the bubbles. After about one day, all the carbon from the eggshell is released. If you removed the egg after sitting in vinegar for one day and then left it on the counter, the shell would become hard again because the shell would take carbon from the outside air.